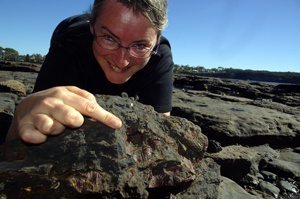 LOOK closely at the rocks around Ulladulla Harbour and you may find remnants of the dinosaur age.As part of the Sydney Basin, which was once a river delta, local rock shelves and cliff faces are littered with fossils from about 250 million years ago.Shoalhaven City councillor Amanda Findley’s passion for rocks was the inspiration behind her idea to showcase the district’s geological heritage. Cr Findley said the rock platform and cliffs around Ulladulla Harbour were home to thousands of fossils just waiting to be discovered.

She said a meandering walkway with picture boards, geological information and Aboriginal Dreamtime stories running south from the seapool area would offer an interesting and stimulating adventure for local residents and visitors to the area.“During a recent trip to Tasmania my kids really enjoyed a host of discovery trails.

“It’s a fun learning experience and something we should be taking advantage of here.”

Cr Findley said, with plans in the pipeline for a boat park children’s play area on the harbour front, this would add another dimension to interest older children and parents.
“Our coast has a really amazing history, with fossils dating back 250 million years – that’s around the time of dinosaurs.
“It’s something we don’t really exploit and a lot of people would be interested to learn more about how the rock layers were laid down,” she said.
Cr Findley said the walk could be linked to other local geologically significant areas such as the Bawley Point rock platform and Pigeon House Mountain. “It’s something interesting and unique that could attract people to our area and keep them here longer.

“We could promote the link to the dinosaurs and get the local school kids involved in the project as well.”
She said involving local children and including the Dreamtime stories of local Aboriginal Elders would result in a walk that the town feels ownership of and could be proud of.
“I love rocks and geology and would find this kind of activity interesting.
“I’m sure there are others out there that would agree and would love to have some feedback about the idea.”

Fossil House will be closed until further notice