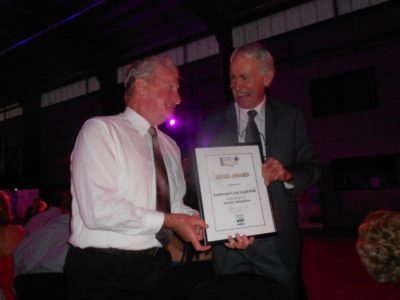 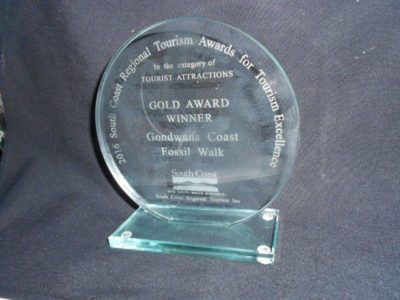 At the South Coast Regional Tourism Organisation’s recent Gala Presentation Night in Albion Park, it was announced that a unique package of Geotourism attractions in Ulladulla was the “2016 Best Tourist Attraction on the South Coast”.

The Gondwana Coast Fossil Walk, a band of about 30 enthusiastic and dedicated volunteers who developed and operate the Guided Fossil Walk in Ulladulla Harbour, the Brodie Park Geological Time Walk and the Fossil House Museum in Green Street Ulladulla, was presented with the prestigious Gold Award.

The Geotourism excellence of the group’s two latest projects, the Brodie Park Geological Time Walk, one of only 2 in Australia and 7 in the world, and the conversion of the oldest house in Ulladulla into the Fossil House Museum, gained the unanimous vote of the judging panel. Both of these Geotourism attractions were completed in 2016 and both are free.

Fossil House will be closed until further notice

Doing the Time Walk to Trace Our Ancient History