Crinoids are sedentary relatives of the starfish and sea urchin. Although they are commonly called “sea lilies”, they are actually animals which anchor themselves to the sea floor. Each animal has a long articulated stem made up of a stack of discoidal plates. At the top of the stem is a cup usually with five arms to waft water-borne food particles into the animal’s mouth. Large groups of crinoids living together on the sea floor waving their arms about in the ocean currents to feed must have resembled a flower garden Since the animal’s hard parts are only held together by soft tissue, they generally disintegrated on death It is not surprising, therefore, that on local rock platforms sections of stems or even individual plates are the most common types of crinoid fossil. Most crinoid species died out at the end of the Permian period and the group almost became extinct. The few species that survive on sea floors to-day are well adapted to their sedentary existence and are almost indistinguishable from the ancient ones which can be found here as fossils. 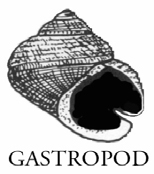 Gastropods are sea snails with soft bodies protected by a spiral unchambered calcium carbonate shell. In this region the Permian gastropods that lived in the cold waters on the sea floor were most probably algal grazers. Almost all gastropod species that ever existed are still around today. Their mobility and ability to protect their soft bodies inside their hard shells probably explains their escape from extinction at the end of the Permian when 80% of all animal & plant species were wiped out. 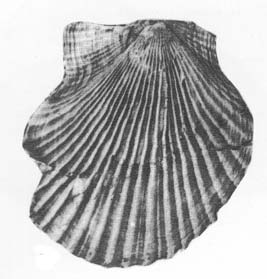 Bivalve Molluscs burrowed in the mud, digging in with their spade shaped muscular foot. Because they lived in an upright position they have identical Left and Right valves. Bivalves were not nearly as common in the muddy sediments on the sea floor as were the Brachiopods. In contrast large bivalves are very common in sandstones of the Snapper Point Formation which indicates that they preferred to live in places where they could burrow into a sandy bottom. 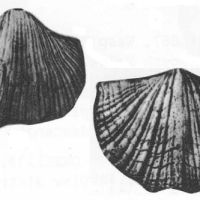 Brachiopods have one of the longest histories and best fossil records of all invertebrates. Here they lived in the mud or were attached to the sea floor, filter-feeding on organic particles carried by ocean currents. Most were attached to a surface by a fleshy stalk that protruded through a hole at the shells’ hinge. Others used the spines protruding from their shells to stabilize themselves in the mud. Although brachiopod shells exhibit a wide variety of shapes they all have symmetrical valves one dorsal and the other ventral.
Most species of brachiopods disappeared near the end of the Permian and very few survive today.