In what type of environment were the sediments deposited here? 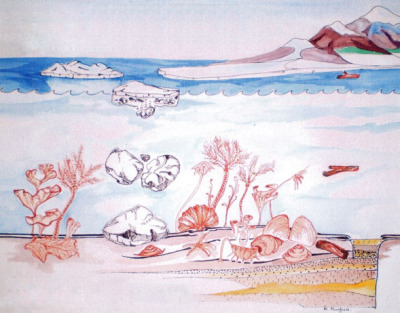 The fossil fauna is made up of several groups of invertebrate animals that are marine bottom dwellers.

They live by burrowing in the muddy-silty bottom or attaching themselves to the bottom in water depths of at least 20 metres (significantly below wave base).

Local artist, Robyn Pomfrett, has given her impression of what the seafloor and nearby landmass must have looked like at that time.

What are ‘Drop stones’ and where did they come from?

The Wandrawandian Siltstone is made up of very fine grained sedimentary rocks formed in a low energy seafloor environment. The presence of a diverse range of very abundant angular to rounded boulders, cobbles, pebbles and gravel in layers of otherwise fine sediment requires explanation. Consistent with the cold water evidence provided by the glendonites, these rock fragments have been interpreted to be glacial erratics or ‘drop stones’ that have had an interesting journey prior to reaching their final resting place here.

Some of the drop stones are metamorphic rocks such as schist, phyllite, slate, hornfels meta-chert and quartzite; others are volcanic or plutonic igneous rocks such as rhyolite, ignimbrite, syenite, dolerite and several types of granite; and a few are sedimentary rocks such as conglomerate and breccia.

All of the drop stones are made of hard, erosion resistant, rock. They are much older than the Wandrawandian Siltstone being Cambrian, Ordovician or Devonian in age. These are rocks that formed the high ground on the Gondwana landmass at the time when the sea flooded the coast to form the Sydney Basin. We know that the pre-basin land surface was far from flat—Durras Mountain was a granite island standing more than 200m out of the Permian sea and at Granite Falls the granite formed another significant granite island in the Permian sea. Further inland there was rugged mountainous, probably snow-capped, terrain with the harder rocks forming the high ground.

Angular drop stones were plucked or ripped from high ridges at least 100km to the south and south west by the moving glacial ice as it began its long journey to the Gondwana Coast. At the coast the ice broke off to form icebergs which then carried their load of assorted basement rock fragments (some of them weighing >10 tonnes) north along the Gondwana Coast. As the ice rafts drifted away from the shore, the ice began melting and the load of rock fragments eventually dropped onto the silty seafloor.

The frequency of well rounded drop stones here indicates that melt water streams that flowed during summer months also must have played a significant role in shaping many of the drop stones.

In the Harbour how can a boulder beach lie beside a typical sandy beach?

The grain size of sediment deposited on beaches depends on kinetic energy levels of the waves and currents. On the south side of the Harbour higher energy waves hurl larger boulders and cobbles at the sea cliff every time a strong NE wind blows. These tools of erosion undercut the cliff by grinding away the rock bounded by horizontal bedding planes and vertical joint planes until they dislodge. When the water retreats it leaves only the larger and heavier particles on the beach as a residual boulder beach deposit while the smaller particles are swept away by the water.

In the adjacent more sheltered part of the shoreline, a sandy beach is formed where the beach has been protected from the full force of the prevailing wind. Wave energy here is only sufficiently strong to throw much smaller sand sized particles onto the shore. When the water retreats it sorts the deposit by removing all finer and lighter particles leaving only polished rounded grains to form a typical sandy beach.