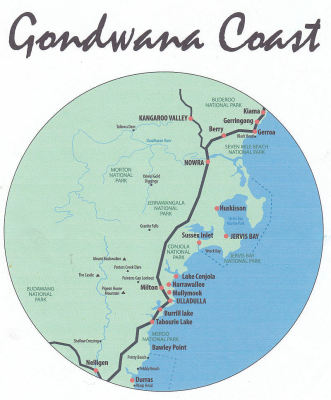 So, what is the Gondwana Coast?

It has been defined as that section of the SE Australian coastline that previously formed the coast of the ancient supercontinent of Gondwana.

Early in the Permian period ~295Ma to ~269 million years ago (Ma), the sea level rose and began to cover the eastern edge of Gondwana and, as a result, fossiliferous sediments were deposited on the seafloor along the ancient Gondwana coast.

The resulting rock sequence which attained a thickness of ~800m is known by geologists as the ‘Shoalhaven Group’.

How old are the rocks in the Harbour’s cliffs and rock platforms?

The rock unit exposed in the Harbour, the Wandrawandian Siltstone formation, is part of the Shoalhaven Group.

This rock unit is ~180m thick and is composed essentially of richly fossiliferous siltstone, with lesser amounts of mudstone and a few much harder, more massive, sandstone beds. The formation is known to extend from rock platforms south of Ulladulla, for almost 80km along the coast to Black Head at Gerroa in the north, and inland to Kangaroo Valley.

Its age has been determined as mid Permian by correlation with sedimentary strata (using fossils) at other locations where rocks had been dated radiometrically by determining the age of volcanic ash deposits above and beneath the fossiliferous layers. This isotopic dating confirms that the Wandrawandian Siltstone was deposited between ~273Ma and 269Ma.

The Permian period began at 299Ma and ended 251Ma with the biggest mass extinction of life recorded anywhere in the fossil record – 95% of all marine species (including many of the fossils found here) and 70% of all terrestrial organisms became extinct.

When was the harbour landscape sculptured to its present shape?

The spectacular landscape of the South Coast of NSW has largely been formed by erosional forces over a long period. The Southern Highlands plateau and sandstone escarpment west of Ulladulla was uplifted at about 60Ma. During the period ~80Ma – 60Ma the Tasman Sea opened up splitting off the New Zealand sub-continent. Uplift of the Highlands has been largely attributed to the rebounding of the edge of our continent following this stretching event. Since that time the land surface has been progressively worn down,although another uplift event is thought to have occurred at about 30Ma.

Like Sydney Harbour, Jervis Bay and Bateman’s Bay,Ulladulla Harbour, with its deep-water channel, attained its present shape largely as a result of erosion by running water. This occurred during the Pleistocene Ice Age when sea level was much lower because much of the world’s water was frozen in large ice caps at the poles. The two most recent glacial phases of this Ice Age peaked approximately 150,000yrs and 18,000yrs ago respectively (see Fig 2).

During these cold intervals coastal rivers eroded channels up to 140m below present sea level as they traveled much further to the east than the present coastline. Coastal features carved out in this way and subsequently invaded by the sea when sea level rose again are known as drowned river valleys.

Of course, the ocean cliffs and wave cut platforms have been significantly modified since the last glacial phase by ocean waves and these erosional forces are still at work to-day. At other localities (e.g. the Yorkshire coast in England) where the sea cliffs are composed of softer rocks, the cliffs can retreat at rates averaging as much as 5 metres per year.

The siltstones exposed in the sea cliffs here are far more resistant and average rates of cliff retreat of ~ 2-7millimeters per year are believed to have occurred. As the rock shelves have widened the potential for waves to further erode the cliff line has been significantly reduced.