What sort of creatures lived on the sea floor 270 million years ago?

Animal groups that thrived in these silty conditions included colonies of Bryozoans (sea fans; Crinoids (sea lilies); and solitary Rugose corals (horn corals). All of these animals attached themselves to the silty bottom and fed by filtering food from the sea water. Animals that burrowed into the sediments on the seafloor include the Bivalve Molluscs, similar to modern day pippis and scallops; two distinct groups of Brachiopods (lamp shells), [i] the spiriferids and, [ii] the often spiny-shelled, productids, both groups became extinct about 251Ma; Other animals that roamed the seafloor included the spiral shelled Gastropods (sea snails), and several types of worms that only left their burrows, tracks or trails as ‘trace fossils’.

How were these marine animals preserved in the sedimentary rock sequence to form such intricate moulds and casts? 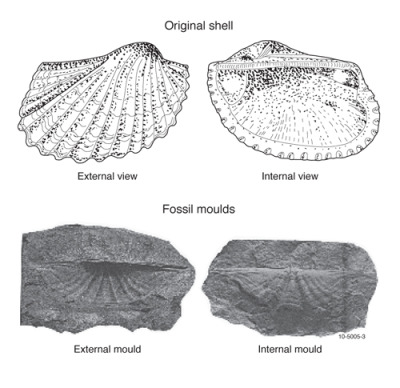 Most sediment deposited on the seafloor here 270Ma ago was very fine grained. The silt and clay sized particles imply that deposition occurred in a very low energy environment where water was only moved about by gentle, low velocity ocean currents. Burial of dead organisms by further sediment must have been sufficiently rapid to limit bacterial decay of the soft animal tissues. Where the hard calcium carbonate shells (=exoskeletons) were subsequently dissolved by groundwater, their shape is generally preserved in exquisite detail forming both internal and external moulds with very sharply defined features.

In some cases, the cavity formerly occupied by the animal’s shell was later in-filled by another mineral substance (such as iron oxide or silica) that was deposited from circulating groundwater. Such fossils are called replacement casts and they reflect the animal’s true shape but don’t preserve the internal structures.